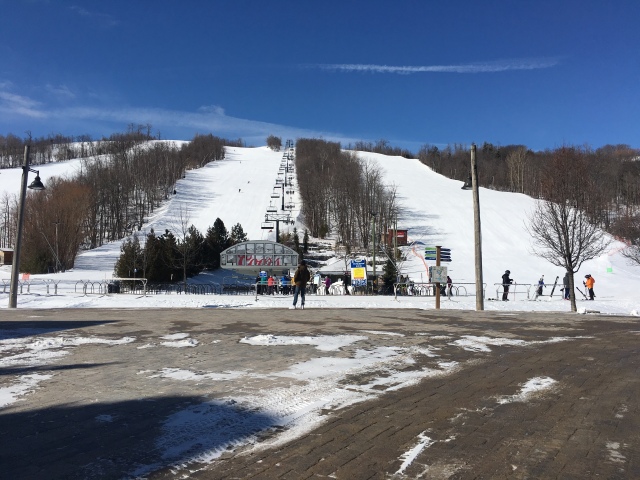 I do love a spa day so I was quite keen to incorporate one into our Canadian trip. We visited the Blue Lagoon in Iceland a couple of years ago and being outside in the warm water surrounded by snow was amazing so I thought that it would be nice to have a similar experience in the Blue Mountains.

Not too far from Collingwood resides Scandinave Spa, a luscious haven of relaxation. Apparently it gets booked up quite quickly but luckily I booked a couples massage and spa entry in advance to secure our slot. It wasn’t until the afternoon though, so we spent the morning exploring the snow covered area around the Blue Mountains. 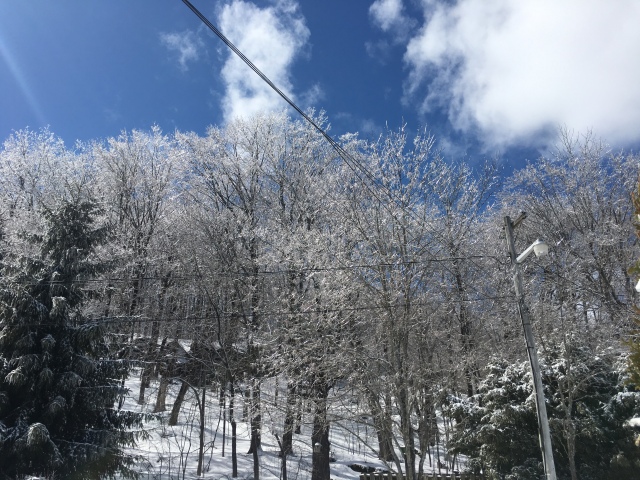 We certainly weren’t disappointed as we were completely spoilt with gorgeous views and untouched snow. It was also a lovely, sunny day and I regretted not bringing any sunglasses. I can really see why people fall in love with Canada. I definitely left a tiny part of my soul right on the top of the Blue Mountains. 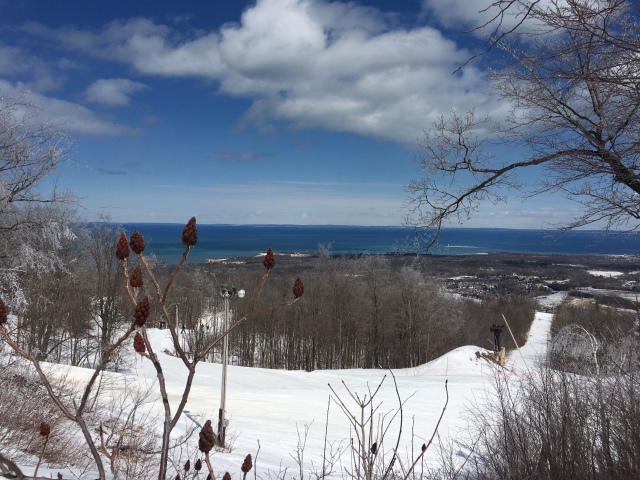 Soon enough it was time to head on over to the spa. The location is absolutely incredible, surrounded by woodland it was really tranquil.

We had a warm welcome from the staff, one of which highlighted how lucky we are to have cheap cheese here in the UK – who knew?! 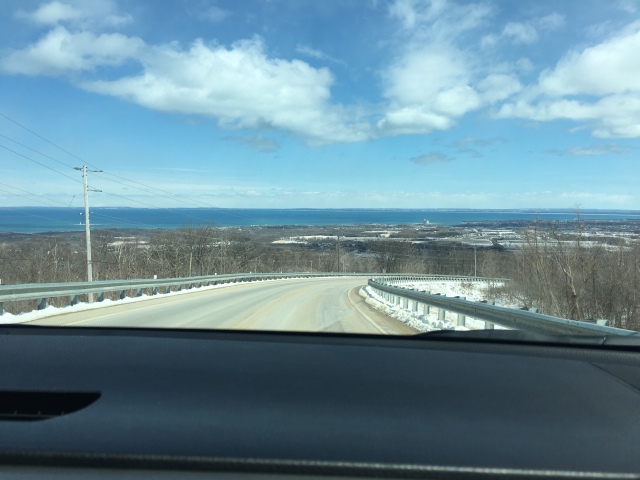 We then popped on our robes and headed over to the treatment room for our hour long massage. It was divine and we felt super refreshed after.

There are lots of zones to explore and I loved the sun rooms which had floor to ceiling windows and loungers. I read quite a few magazines in three of the rooms and it was nice to just exist for a bit.

The pools were also beautiful and clean. I loved the hot pools but didn’t bother with the cooler ones. I think I would have frozen over!

In the evening we went to a steakhouse in Downtown Collingwood and had a feast. The food was delicious and we reflected on what wonderful we were having. 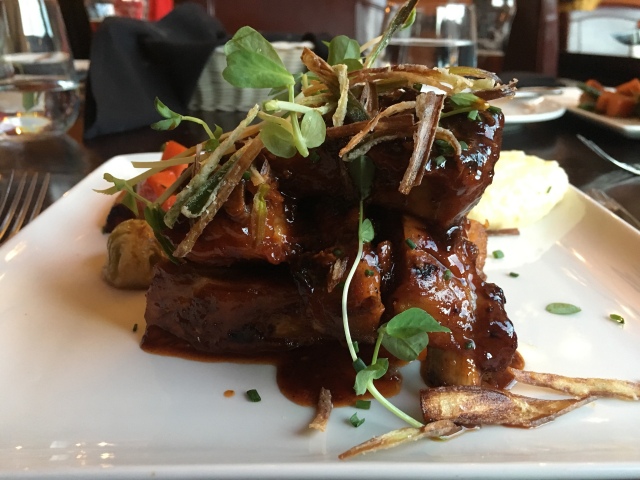 Have you visited the Blue Mountain/ Collingwood area? 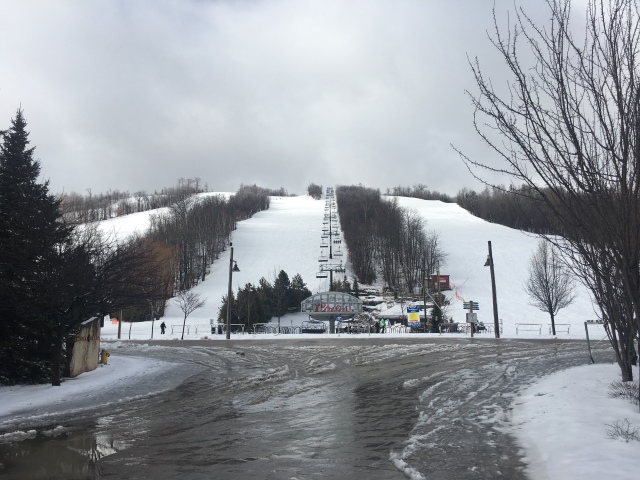 Phil has been desperate to try his hand at skiing for years but to be honest, it’s never really been high on my wanderlust list. However, when we realised that we could incorporate skiing into our Canadian trip, we booked a lodge at the Blue Mountain resort and off we went.

I’m not a very athletic person and whilst I enjoy dancing and *some* exercise, I’m more of a creative kinda girl and things like skiing don’t come naturally to me. I know that it’s due to a block installed by my mind because physically I can do adrenaline junkie activities as well as high energy stuff but in my mind I get scared and won’t allow myself to fall out of my comfort zone.

Phil on the other hand, is literally amazing at anything he sets his mind on. I went ice skating with him once and he said he had been a couple of times as child but there he was skating backwards and spinning in circles like a figure skater in training whilst I clung to the railing for dear life.

Let’s just say that I knew before we arrived in the Blue Mountains that Phil was going to excel at skiing and I would be going at a much slower pace. 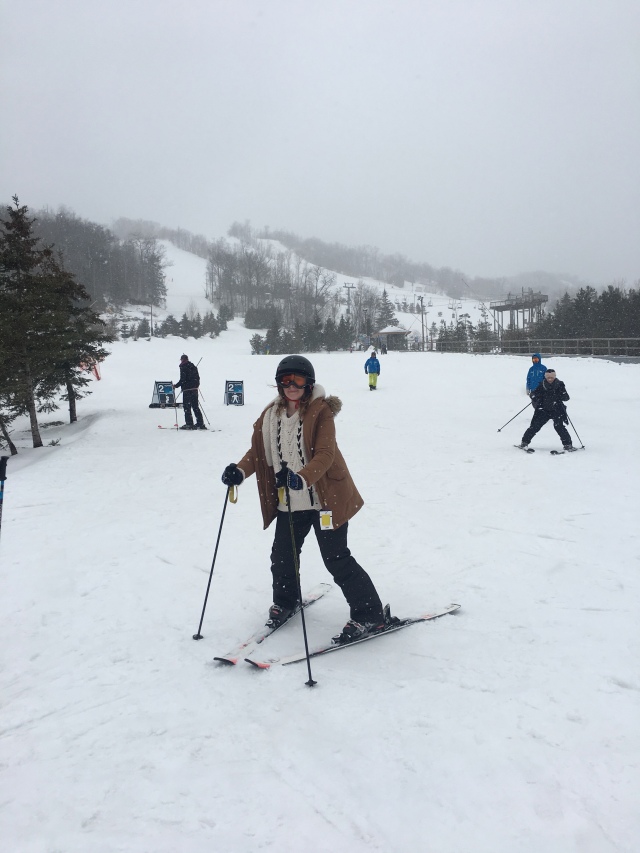 We signed up for skiing lessons and were fortunate to have an amazing instructor called Sean. He really took the time and patience (especially with me) but also challenged us when we needed challenging. It played out exactly as I thought it would with Phil morphing into Eddie Eagle within minutes and me taking an hour to grasp stopping (pizza shape for the win).

I was fine putting the skis on and balancing around on them. I was also fine climbing the nursery slope sideways. The problem came when I slipped at the top and whizzed past Phil and Sean shouting ‘it was an accident’ before Sean saving me from a near death fall into an icy pond (literally two inches from the edge!). From then on my progress was stunted and I must have climbed up that slope sideways fifty million times before I felt like I had good control stopping. Anyway, after that it felt good and I began to enjoy it a little more and felt confident. 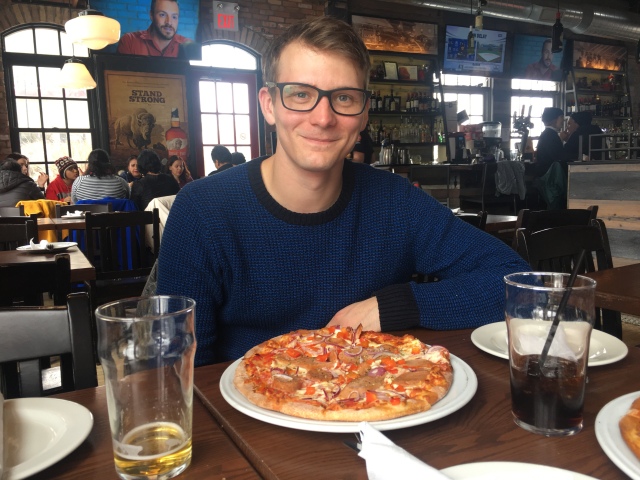 We spent quite a bit of time in the village that day and enjoyed Italian food, s’mores hot chocolate and poutine. It was great. 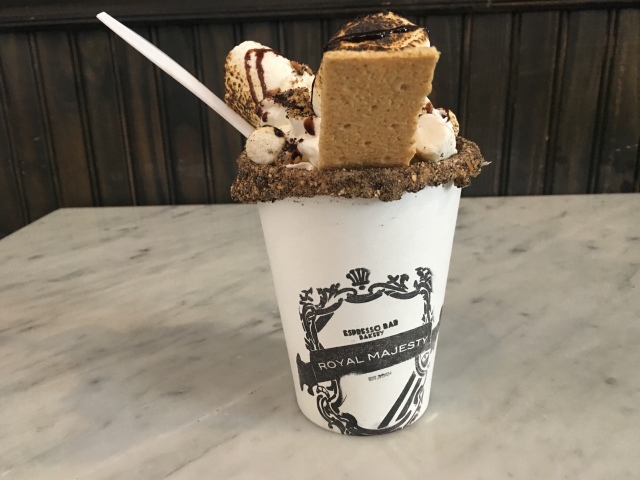 We were also lucky with the weather, we had heavy snow the night before and heavy snow all day. Whilst it made visibility a bit pants (at one point I could barely see three metres ahead), it did make for great skiing conditions.

After our first day, we returned knackered but optimistic about our next trip on the slopes.

Have you tried skiing?

When planning our trip to Canada there was one activity that we were desperate to squeeze in – skiing. I had never tried skiing before and was almost certain that I wouldn’t be very good at it, but we like to try new things and Phil was especially keen to give it a go.

It was tricky to find a place that would be open so late in the season (April) and we weren’t certain that we could go until a couple of weeks beforehand due to the weather. Luckily for us we were able to ski and I found a place that seemed perfect – The Blue Mountain Resort. 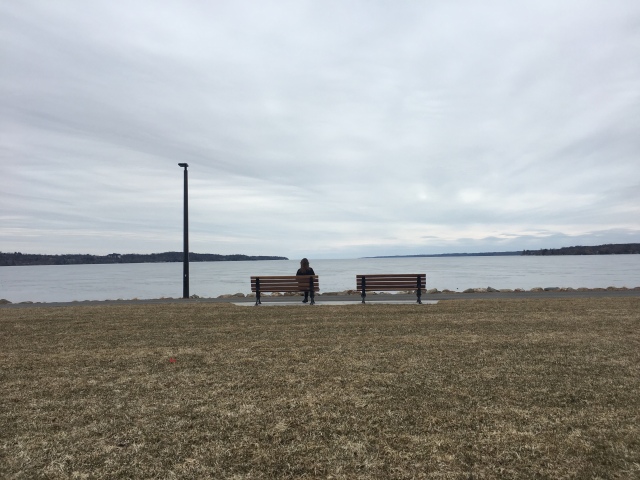 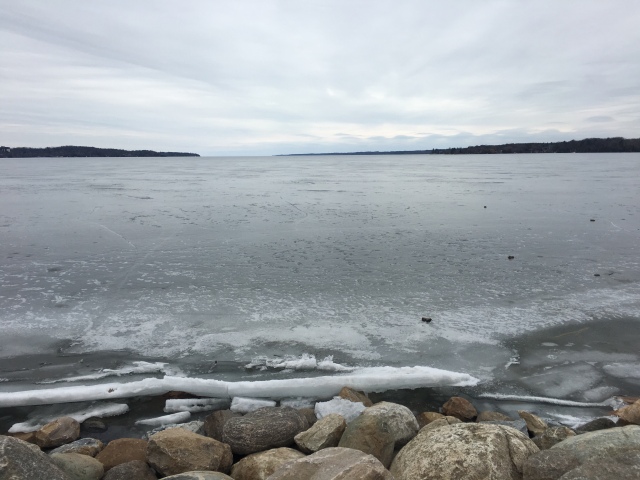 It’s just a couple of hours north of Toronto, and the drive was lovely. Lots of Canadian farmland complete with traditional barns and farmhouses. I loved just looking out of the window at the beautiful countryside.

We stopped a couple of times, once at an outlet mall near Barrie and once in Barrie itself to look at the gorgeous frozen lake. It was breathtakingly beautiful (and freezing, absolutely freezing).

Once we arrived in the Blue Mountains, we picked up the keys to our lodge which was really cute and quiet due to it being so late in the season and post spring break. 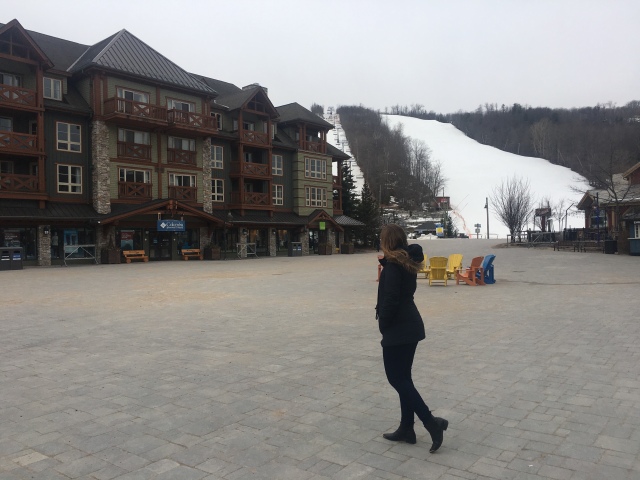 We went for dinner and a mooch about the village, which has a variety of shops and restaurants. We also went for a drive to the lake so that Phil could get some drone shots but it was really windy which isn’t great for droning.

It then started snowing heavily which we were excited about because fresh snow is great for skiing!

Have you been to the Blue Mountains? 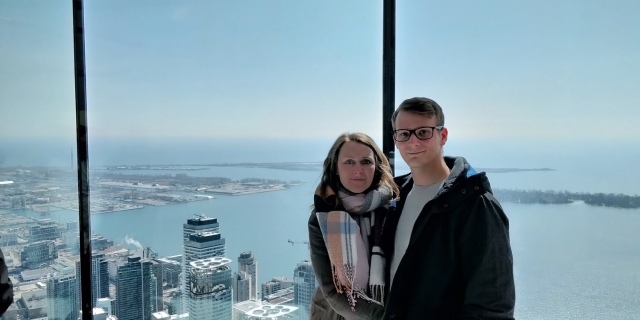 Once again we were blessed with beautiful weather which was just perfect for exploring more of Toronto by foot. I’m such a fan of walking my way around cities because you can really take it all in and feel a part of the commotion. We often discover new eateries and pretty places that we would never have seen if we were in the car.

One of the most iconic buildings in Toronto is the CN Tower. It dominates the skyline and offers amazing views of the city. We knew it was a must visit place whilst in Toronto. It was reasonably priced and a nice activity which took around an hour and a half to get around. They have a gift shop that has some cute souvenirs too.

Toronto is a bustling city that is full of life and there is so much to do. Chinatown is great and a decent size, Kensington market is quirky and super cool with eateries, vintage shops and art. It has a Camden vibe and is lovely and colourful.

We also found lots of places to shop, the Eaton Centre is packed with big brands.

Most of all, I enjoyed existing amongst the tall buildings and architecture that told a tale. I liked looking up at skyscrapers, picking out my favourite houses on residential roads and finding cool street art. It was a wonderful day exploring. 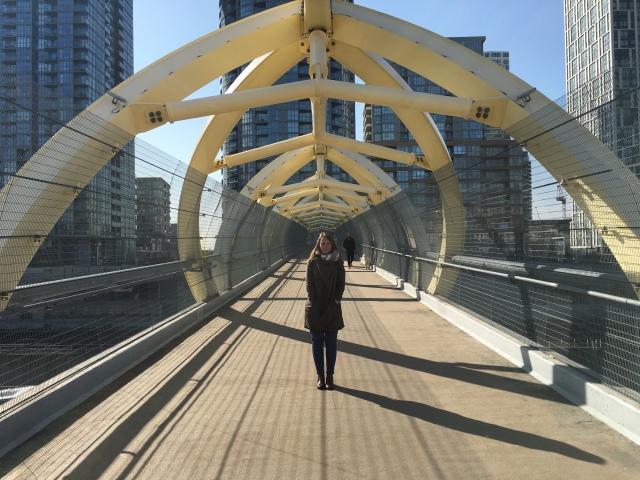 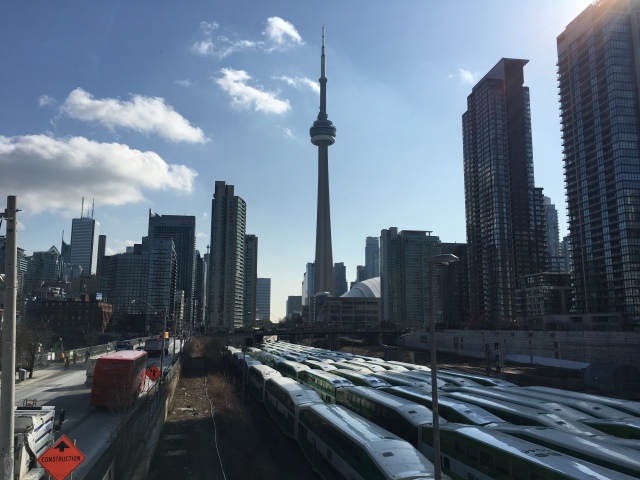 Have you visited Toronto?